There’s something for everyone at Chamberfest 2021

After a year-long hiatus, Chamberfest is back in full swing from July 22nd till August 4th, 2021. The arrival of the new Artistic Director, Carissa Klopoushak has brought novelty to the organization. Since her first onstage performance as a violinist at Chamberfest 2009, Carrissa has been a pillar in the Chamberfest community. “I met the previous Chamberfest Artistic Director, Roman Borys in 2009, while performing at a music competition he was judging […] that’s how I was invited to perform at the festival and how we got to know each other over the last 10 years.”

“Chamberfest is about community: it’s about taking care of musicians and people who love music, that will never change.” What Carissa is adding to the mix are her own honest experiences and perspectives. “A woman of the next generation,” Carissa is focused on doing everything she can to make the programming more inclusive. She says: “this is not a challenge when there are so many talented people, it’s easy to be creative and invite different voices to what we do.”

Having said that, the changes to the 2021 festival are mostly circumstantial. This year’s festival is being delivered in a hybrid format, meaning there will be a mix of in person events and live-streamed or pre-recorded performances. Chamberfest operates year round. Eight hybrid events have already been hosted, which is why they feel very prepared for this year’s festival.

To make up for the lack of contact between artists and audiences that defines Chamberfest, they created Chamber Chats; an interactive hour between the audience and musicians held over Zoom. Guests are interviewed by CBC broadcaster Eric Frisen and audience members have the chance to connect with their favorite interpreters. Chamber Chats are exclusive to the festival livestream pass.

While the borders are closed, this year’s programming will celebrate Canadian artists. “There are so many international superstars that happen to be Canadian” says Carissa, who is excited to introduce them to the Ottawa music community. 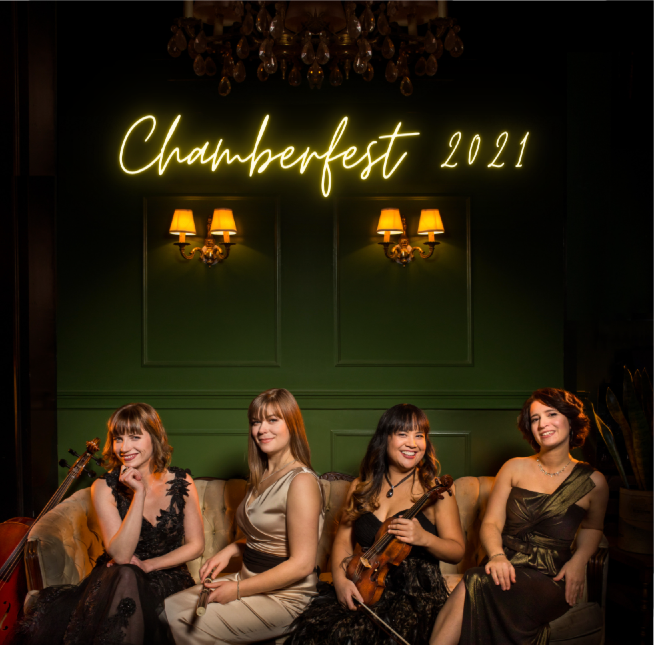 Most people are drawn to Chamberfest because it has an open definition of what chamber music is: small intimate groups playing music together. Out of the 90 events and 7 concert series, Chamberfest is guaranteed to have something for everyone. The Marina Kun and Bytek Signature Series, named after their generous sponsors, features traditional chamber music and is the core programming of the festival. The Beechwood Series is an immersive walk around experience in the Beechwood cemetery where patrons will be led through the grounds to discover music. For the first time, the Steinway Series will be taking place in the parking lot of the Steinway Piano Gallery on Innes road. The Record Center Series is sure to be popular with 5 free performances at the Record center in Hintonburg. To top it all off, the Chamberfringe Series will be taking place in the courtyard of SAW Gallery. It’s for “things that don’t traditionally fit into the chamber music box but are still chamber music,” such as a murder mystery concert given by Infusion Baroque and shows from The Fretless and OKAN. All of these series will be live-streamed and available with the livestream festival pass.

Chamberfest is proud to have Infusion Baroque performing this year. They are a baroque trio sonata formation made of two melody instruments (violin and flute) and continuo harpsichord and cello. The quartet is composed of four friends, Alexa, Sallynee, Andrea and Rona who met during their time at McGill University. They formed an ensemble after graduating in 2014 and stayed together after winning the grand prize at the 2014 Early Music America Baroque Performance Competition. Their music has been described as “polished, energetic, dynamic and alive.” Rona Nadler, the harpsichordist agrees, “we play with energy and souplesse […] we get a lot of joy from playing together, we have great communication and an enjoyable rehearsal process.”

Rona is “excited to play a live concert and be on tour for the first time in over a year.” Their murder mystery concert ”Who Killed Leclair?” is based on the life of the violinist and composer Jean-Marie Leclair who’s murder remains unsolved. Between performing Leclair’s pieces they tell the story of his murder and offer clues on the potential suspects. At the end of the programming the audience is asked to vote on who they believe murdered Leclair.

Between touring, the ensemble will be releasing their third album next year. Titled ‘Virtuosa,’ the album will be reviving the lives and stories of historical women performers and composers. While they are working on this project you can listen to their previous albums on all music streaming platforms.

“Ottawa has been starved for live music,” says Carissa, who encourages everyone to attend this year’s festival.

“We’ve got something for everybody, why not take a chance?” Tickets and festival passes for Chamberfest are on sale at chamberfest.com or you can call Jordyn at the box office (613-234-6306) to reserve your seats.