Mark Saunders, the Director of Fun at Saunders Farm, has always known he was an entrepreneur to his core. He’s been fermenting the idea of planting an apple orchard and starting a Cidery for many years. He just needed the “pandemic push” to start.

At the annual Farm team retreat in February 2021, he shared his dream and vision of opening and creating an Estate Cidery on the Farm. 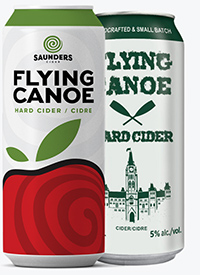 “I know it’s going to take a lot of time and effort to start the company, and we have to plan, and plant an orchard, but it will be a whole new amazing experience for visitors to the Farm. We’re
going to need everyone’s help,” enthused Mark Saunders. The team was juiced up! Fresh cider is on its way.

“Be careful of what you wish for,” Mark says with a wink. It seems the pandemic had sharpened Mark’s manifestation skills, as just 5 weeks after announcing to his team that he wanted to start a Cider Company, he was in the business.

Flying Canoe will continue as a flavour and a brand within the Saunders Cider co.“We’re thrilled that Flying Canoe, Ottawa’s first Cider company, will be expanded by Saunders Farm. It’s been a labour of love for me and my family and I am happy that the Saunders family will nurture and grow Flying Canoe,” says Pete Rainville, founder of Flying Canoe. “And my boys are excited that Mark threw in a lifetime pass for my family to seal the deal. Saunders Farm really is a special place.”

A Ciderhouse, Tap room and Store will open as soon as permits are in place and restrictions are lifted, hopefully in early July. Saunders Cider will start with the original Flying Canoe recipe and then plans to add seasonal flavours for Fall and Christmas later this year.

About Saunders Cider
Saunders Cider is the farm-fresh, fun and fantastical new hard cider located on Saunders Farm in Munster. Made with 100% local Ontario Apples, you can taste the freshness that makes Cider so appealing. The signature first flavour will be the original Flying Canoe recipe. New flavours, styles and varieties will be available in the coming months.

About Saunders Farm
Saunders Farm is a 100-acre agri-tourism destination family farm in Munster, in the City of Ottawa. Saunders Farm hosts community festivals, weddings, Farm Camp, Haunting Season, Frightfest, and Christmas in the Country. Fun fact: you can also get lost in the largest collection of hedge mazes in North America.