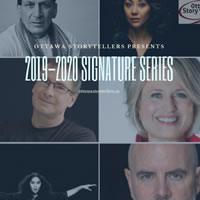 What do a man from Saskatchewan, the Trojan War, and actress Vivian Leigh have in common? They all appear in Ottawa StoryTellers’ 2019-2020 Signature Series , n ow in its 19th year. The only professional storytelling series of its kind in the city, this season’s Signature Series offers six diverse storytellers from Ottawa, Canada, and beyond. Audiences will hear stories that range from the personal and autobiographical, to the traditional and literary. This season’s artists include: a renowned Métis storyteller and theatre artist from the Prairies; a podcasting legend and epic performer; a celebrated Ottawa actor sharing stories from her homeland of South Africa; an Egyptian storytelling superstar; a returning Fringe favourite back by popular demand; and a local television news anchor who has decided to tell her own story for a change.

“If variety is the spice of life, this season is a ghost pepper,” laughs Kate Smith, Artistic Manager of Ottawa StoryTellers. “Every artist in the season is unique, and their stories and styles are as diverse as they are.” This is the first season Smith has programmed since joining the organization last January. With a background in theatre, she hopes that audiences will leave each show transformed: “In a political climate where it feels like there is increasing pressure towards tribalism, storytelling provides an opportunity to really listen and reflect on a different perspective. And I think we need that right now – perspective.”

Beginning in October 2019 and running through May 2020, this year’s Signature Series includes:

One Métis Man’s Life Growing Up in Saskatchewan with Bruce Sinclair (Arts Court Theatre, October 24, 2019). Storyteller Bruce Sinclair recounts growing up in a small town in Northern Saskatchewan with a highpercentage of Métis and First Nations community members. His stories explore identity, poverty, family relationships, discrimination, racism – and the spirit of the people.

Blame it on Zeus’ Thunderbolt: The REAL Origin Story of the Trojan Wa r (Arts Court Theatre, November 21, 2019). In this witty, fast-paced and irreverent tour through the mythological origins of the Trojan War, storyteller and prolific podcaster Jeff Wright details the troubles that begin high atop Mount Olympus when Zeus, King of the Gods, once again falls victim to the insatiable demands of his own deific ‘thunderbolt.’

In Being coloured/ful in a black and white world (Arts Court Theatre, March 4, 2020), Ottawa transplant and award-winning performer Jacqui Du Toit takes you on a journey to her motherland, South Africa, to the times of great struggle, uprising, and racial divide, and shares the details and stories of growing up in apartheid and post apartheid. Jacqui will have the audience laughing, crying – and even dancing, as the piece is set to traditional drumming.

Fragments of Eternity by Egyptian storyteller Chirine El Ansary (ODD BOX, March 19, 2020) is an eclectic selection of stories spanning an incredible 25-year career. El Ansary has handpicked stories that have become, as she describes, “an invisible family” and are sourced from her observations while travelling the world.

Magnificence (ODD Box, April 23, 2020) is based on Keir Cutler ’s relationship with his late mother, May Ebbitt Cutler, former mayor of Westmount, founder of Tundra Books, and author of the award-winning, highly praised memoir ‘I Once Knew An Indian Woman,’ a book that had a great effect on him as a child. This is his tenth original monologue.

Broadcaster and storyteller Lucy van Oldenbarneveld recounts her adolescence growing up in Hamilton, Ontario in Me, Vivian Leigh and the Roller Rink (Arts Court Theatre, May 14, 2020). In this comedic and  autobiographical collection of stories, she details her attempt to escape gritty, working class Steeltown through the glamour and romance of ‘Gone with the Wind.’

The season kicks off on Thursday, October 24 with Bruce Sinclair’s One Métis Man’s Life Growing Up in Saskatchewan . Sinclair is doing this one-night-only performance between multiple shows at the biennial Montréal Storytelling Festival, which is also running this month.