Listen Up! to run parallel programs in French and indigenous schools in Ottawa and Saskatoon 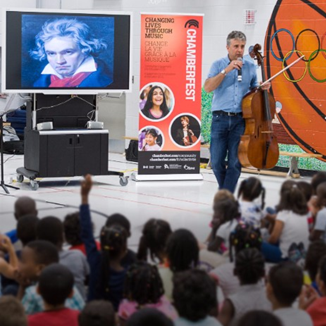 Since Listen Up!’s conception in 2010, the Gryphon Trio has been producing the program across the country. Last year, Ottawa became its hub through the trio’s partnership with Chamberfest.

For the first time, Chamberfest and Gryphon Trio will work specifically with two minority communities – the Francophonie in Ottawa, and the Cree First Nation in Saskatoon.

“Listen Up! has become central for both Gryphon Trio and Chamberfest over the past two years,” says Gryphon Trio cellist and Chamberfest artistic and executive director Roman Borys. “Ottawa has really taken to its role as a hub for Listen Up!. It’s proven to be a natural fit, being home to Chamberfest, a friend and partner to Gryphon Trio for nearly a quarter century.”

The students’ mentors from the arts community will include composer Kelly-Marie Murphy, who recently won the 2018 Azrieli Commission for Jewish Music, worth $50,000. Inspired by the students’ work throughout the year, Murphy will compose a series of pieces for children’s choir and piano trio, which the project’s participants will perform at a spring culmination concert alongside conductor and music educator Rob Kapilow and Listen Up! founders Gryphon Trio.

“As a music educator, I have been following the increasingly significant involvement of Chamberfest in schools as well as in the wider community outside of the summer festival,” says Lise Maisonneuve, a music teacher at Séraphin-Marion. “When I taught at De La Salle high school, I witnessed first-hand the benefits of Chamberfest concerts and musicians on the enthusiasm of the music students. I’m looking forward to seeing a similar magic worked on the students in my elementary school.”

In Saskatoon, the project begins on Oct. 4 at St. Mary’s Wellness and Education Centre, which offers health services alongside kindergarten to grade 8 learning to its largely indigenous student population. In collaboration with the Saskatoon Symphony Orchestra, Chamberfest and Gryphon Trio will guide students through an in-depth, collaborative arts curriculum inspired by the theme of “tapwewin” (“truth” in Cree) as well as the students’ Cree and Métis backgrounds. With mentorship from poet Leah Dornian, Métis artist Zoey Roy, composers Carmen Braden and Paul Suchan and choral director Jennifer Lang, Borys says, “the program will offer participants a vast array of creation experiences that will inspire them and help them develop tools that will facilitate their individual engagement with the arts for the rest of their lives.”

Listen Up! is the flagship program in Chamberfest’s Community Engagement and Education (CEE) pillar. Driven by “changing lives through music,” CEE offers programs that engage young and emerging musicians, elementary and secondary students, children on the autism spectrum and long-term care residents. Listen Up! Ottawa is generously supported by Marina Kun.

About Ottawa Chamberfest
Approaching its 25th anniversary, Ottawa Chamberfest brings together the boldest names in ensemble and solo performance for musical celebration in the nation’s capital through its concert series, community engagement and education (CEE), and its summer festival. The world’s largest festival of its kind, the Chamberfest summer festival is a 2017 Festivals and Events (FEO) Ontario “Top 100” and winner of seven consecutive Lieutenant-Governor’s Awards for the Arts.

About Gryphon Trio
The Gryphon Trio has firmly established itself as one of the world’s preeminent piano trios, garnering acclaim and impressing international audiences with its highly refined, dynamic and memorable performances. With a repertoire that ranges from traditional to contemporary and from European classicism to modern-day multimedia, the Gryphons are committed to redefining chamber music for the 21st century. The Gryphon Trio has been developing and producing programming like Listen Up! with Chamber Factory since 2010 – together, the groups facilitate funding for arts education from organizations like the Bank of Montreal (BMO). The 2017-18 season will mark the Gryphon Trio’s 25th anniversary.